Join us for an interactive evening full of dance performance, world premieres, and celebration of community leadership.

Invertigo’s Fall Soirée is an evening to come together, gather around kitchen tables across LA and beyond to enjoy choreography, cocktails and community.

Invertigo Dance Theatre is an institution at the forefront of Los Angeles dance, connecting people to story and community through a blend of dynamic contemporary movement and compelling theatre.

The event will be hosted through invertigo.org. Invertigo Dance Theatre will be celebrating 10 years of Dancing Through Parkinson’s. Additionally, we’ll be honoring movers and shakers who have made a huge impact in our arts community.

Our fabulous line-up of Soirée Speakers and Honorees:

Learn More about our Speakers and Honorees below

Emcee for the Evening
Dawn Robinson-Patrick

To attend the Soirée, click here to RSVP and then you will be able to make your donation after completing your RSVP.

We are offering a sliding scale option, as part of Invertigo Dance Theatre values and efforts to include all communities to participate at our events.

Thank you for supporting the arts and community engagement!

If you would like a box of goodies and interactive elements to enjoy during the Virtual Soirée, click here to RSVP, and then select how many boxes you would like.

You’re a Star! Sponsor the Soirée!
Donate $2,500 and enjoy two interactive experience boxes as well as acknowledgements during the event

If you would like to sponsor the Soirée at the “you’re a star!” level, click here to RSVP, and for $2,500.00 you will get two boxes to enjoy goodies and interactive elements during the Soirée, plus an acknowledgement on Invertigo’s website and during the event! 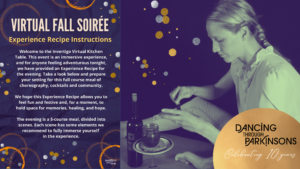 We’re so excited to celebrate the night with you! To all our guest and participants we are offering an Experience Recipe, for anyone who’d like their hand at creating their own interactive experience as you join us for the night. 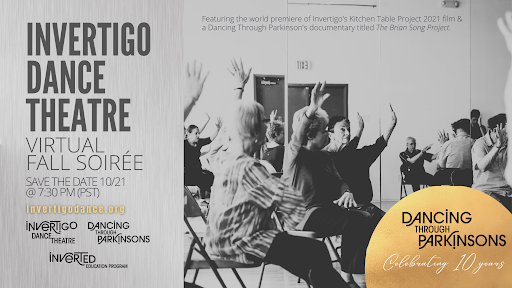 Please consider sponsoring the event and receive special boxes delivered to your door for an interactive experience during the Soiree, as well as  a special acknowledgement during the event. For more information on sponsorship levels, please contact Development Manager, Chelsea Sutton, at [email protected]

Thank You to Our Soirée Sponsors

Thank You to Our Organizational Sponsor

Dawn Robinson-Patrick has over 20 years of experience in arts management, event coordination,  arts education, and creative consultation. Her work is specifically focused on program  development for cultural arts organizations, government agencies and nonprofits that align with  diversity, equity, and inclusion initiatives. Robinson-Patrick has held roles with notable arts  organizations including, Lincoln Center for the Performing Arts, Brooklyn Academy of Music, San  Francisco Jazz, Alonzo King’s Lines Ballet, Brava Theater Center and The Ford. She is currently the  Director of Education and Community Engagement for the Geffen Playhouse.

Robinson-Patrick also has a long history in the arts as a contemporary modern dance performer,  teacher and choreographer. She has performed with notable companies including, Della Davidson  Dance, Liss Fain Dance, Company Chaddick, Nia Love | Blacksmith’s Daughter, Nicholas Leichter  Dance and Organic Magnetics among others. Her collaborative and choreographic work has  brought her to the American Arts Exchange Festival in Adelaide, Australia, Freedance Festival in  Kiev, Ukraine and Dialogue de Corps Festival in Ouagadougou, Burkina Faso, Africa. Her  performance background highly influences her desire to support, promote and cultivate the arts  community and its creative expression as an avenue for social justice and political change.

Bernard Brown is a Los Angeles-based artist-citizen working at the intersection of blackness, belonging, and memory. Bernard choreographs for stage, specific sites, film, opera and serves as Artistic Director of Bernard Brown/bbmoves, social justice dance theatre. With a twenty year tenure with Lula Washington Dance Theatre, other credits include David Rousseve/REALITY, Nike, Kamasi Washington, Mikhail Baryshnikov, among others. Recipient of the Westfield Emerging Artist and Lester Horton Awards, Brown has been featured in Dance Magazine, the New York Times and Los Angeles Times for his dance activism. His writing has been featured in digital journals. A graduate of Purchase College and UCLA, he is an Assistant Professor at Loyola Marymount University and a Certified Katherine Dunham Technique Instructor Candidate. The Los Angeles Times has called him “…the incomparable Bernard Brown…”

Supervisor Holly J. Mitchell was elected to serve the Second District of Los Angeles  County on November 3, 2020. Throughout her career in public service, Supervisor Mitchell has always worked with the understanding  – that creating a California where all residents can thrive – means investing in the communities, families and  children of LA County.

Having authored and passed over 90 laws in the California Legislature, Supervisor Mitchell brings an extensive  public policy record to the Board of Supervisors. Many of her bills have been at the forefront of expanding  healthcare access, addressing systemic racism, and championing criminal justice reform.

During her tenure in the California State Legislature, Supervisor Mitchell represented the 54th District for three  years as an Assemblymember and later served seven years as State Senator for the 30th District.

As State Senator, she also held the distinction of being the first African American to serve as Chair of the Senate  Budget and Fiscal Review Committee. In this capacity, she led the passage of state budgets each totaling over  $200 billion for the fifth largest economy in the world.

Prior to serving in elected office, Supervisor Mitchell was CEO of Crystal Stairs, California’s largest nonprofit  dedicated to child and family development. In this role, she ensured that families across Los Angeles County  gained access to childcare and poverty prevention resources. Before leading Crystal Stairs, she worked as a  legislative advocate at the Western Center for Law and Poverty.

Supervisor Mitchell’s leadership has been recognized by over 100 community and business groups. She was  recently honored as a 2020 Visionary by Oprah Winfrey’s O Magazine for making California the first state in the  nation to ban natural hair discrimination with The CROWN Act.

As Supervisor, Mitchell is proud to serve the two million residents of the Second District which includes the  neighborhood she grew up in, Leimert Park, and the following cities: Carson, Compton, Culver City, Gardena, Hawthorne, Inglewood, Lawndale, Lynwood, parts of Los Angeles, and dozens of unincorporated communities.

Supervisor Mitchell is a University of California at Riverside Highlander, a CORO Foundation Fellow and  mother to Ryan.

My name is Gina Avila. I have been with the Hope Street Margolis Family Center for 17 years as the Education Coordinator. I have a background in psychology and special education and believe that the more positive adults students have to guide them, the more successful they will become.  I absolutely love the people and the community that I have been so privileged to serve.  As a social services/resource center for youth and families, we provide services for  about 300 students a year in the underserved area of Pico Union in downtown Los Angeles. We strive to provide quality programming that include academic, recreational and artistic activities that enhance the lives of those we serve. I applaud organizations such as Invertigo who seek to expose students to new and innovative forms of expression through dance and movement. And to all of those who share the common goal of shedding light and love to students everywhere.